Where is Leprosy Found Today

about leprosy and more

Leprosy still exists. In fact, every two minutes, one person in the world is diagnosed.

Some countries claim leprosy has been “eliminated” but this just means the number of cases reported and recorded by their government is under 1 case per every 10,000 people (0.01%). Elimination is not eradication.

More info: This information relies on cases being reported and recorded accurately. There is evidence to suggestion in India, for example, that there are “millions” of cases “missing” from the official statistics because these people have not been found or treated or recorded. Refer to: The Missing Millions A Threat to the Elimination of Leprosy 2015.pdf

Yes. Leprosy is mildly contagious. But within 24 -48 hours of starting Multi-Drug Therapy (MDT) the patient is no longer infectious and cannot pass the disease on to others. More info, if required: The Leprosy Mission often also conducts “contract tracing” activities to find the patient’s family members, friends, colleagues who may have been exposed to leprosy, testing them for leprosy and possibly providing then with an anti-leprosy medication (rifampicin) which may help prevent infection.

It is thought that leprosy is caught through close direct and prolonged contact with a person infected with leprosy. Most likely through the water droplets of the nose, eyes and mouth (via coughing and sneezing). We are still investigating.

More info: That’s why The Leprosy Mission is investing in and conducting research – so we can stop this disease at the cause and make leprosy a thing of the past.

There are millions of people across the world still living with the effects of leprosy, however, there are only two kinds of leprosy patients currently officially reported:

a) Number of registered cases – i.e. those undertaking Multi-Drug Therapy (MDT) treatment for leprosy in that year (circled below in red) 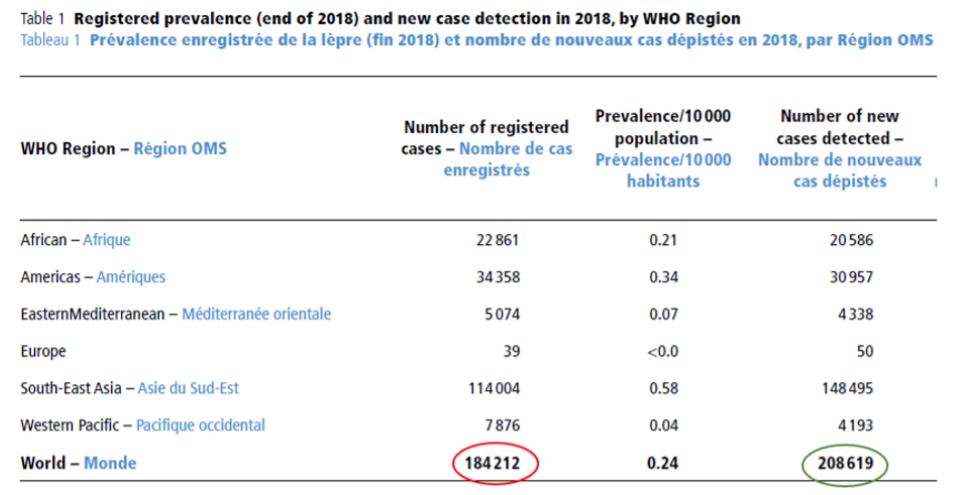 b) Number of new cases diagnosed in that year (circled below in green) According the latest statistics released by The Word Health Organisation (WHO):

In Australia & in the countries TLMA supports: